Seventeen-year-old Ana Flores has worked in the tobacco fields in North Carolina with her single mother for the past five years. Loopholes in US child labor laws and regulations have allowed Ana and other juvenile workers to endure brutal working hours and conditions cutting and spearing tobacco under the charge of unsympathetic farm labor contractors. Having long experienced symptoms consistent with heat exhaustion, pesticide poisoning, or “green tobacco sickness”, Ana has vowed that her younger brother and sister would never suffer such protracted feelings of hunger, exhaustion and illness as she has in those “suffocating” fields.

Last week, AFOP Executive Director Daniel Sheehan had the pleasure of meeting Ana at the Human Rights Watch and Child Labor Coalition’s special briefing “Too Young and Too Dangerous: The Hazards of Harvesting Tobacco and Other Crops for Farmworker Children” in honor of International Human Rights Day. When questioned how she would address opposition to reforms of US labor laws, Ana exclaimed: “It’s the 21st century! Come on!! Why are these tobacco companies being allowed to exploit us? Wasn’t child labor in factories banned in the 19th century?” 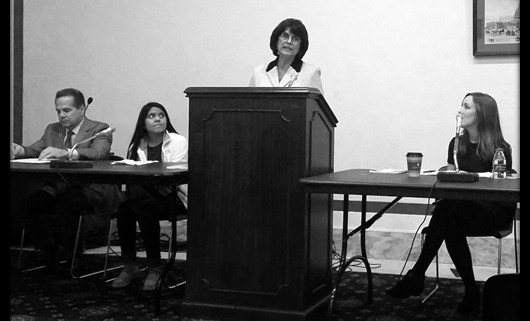 Fortunately, after more than a decade of advocacy, proponents of legislation reform won a major victory this September with the passing of the EPA’s Agricultural Worker Protection Standard, which bans children under the age of 18 from handling pesticides and limits individuals from re-entering fields where pesticides have been recently sprayed.

As AFOP commemorates this 67th anniversary of the adoption of the Universal Declaration of Human Rights, we also seize this moment to reiterate the urgency to eliminate all unjust labor standards in the United States and around the world that deprive children of their dignity, their childhood, their potential, and their physical and mental health. Again, we say “Come On!” Children are not small adults. They have a right to a childhood. These changes are long overdue.